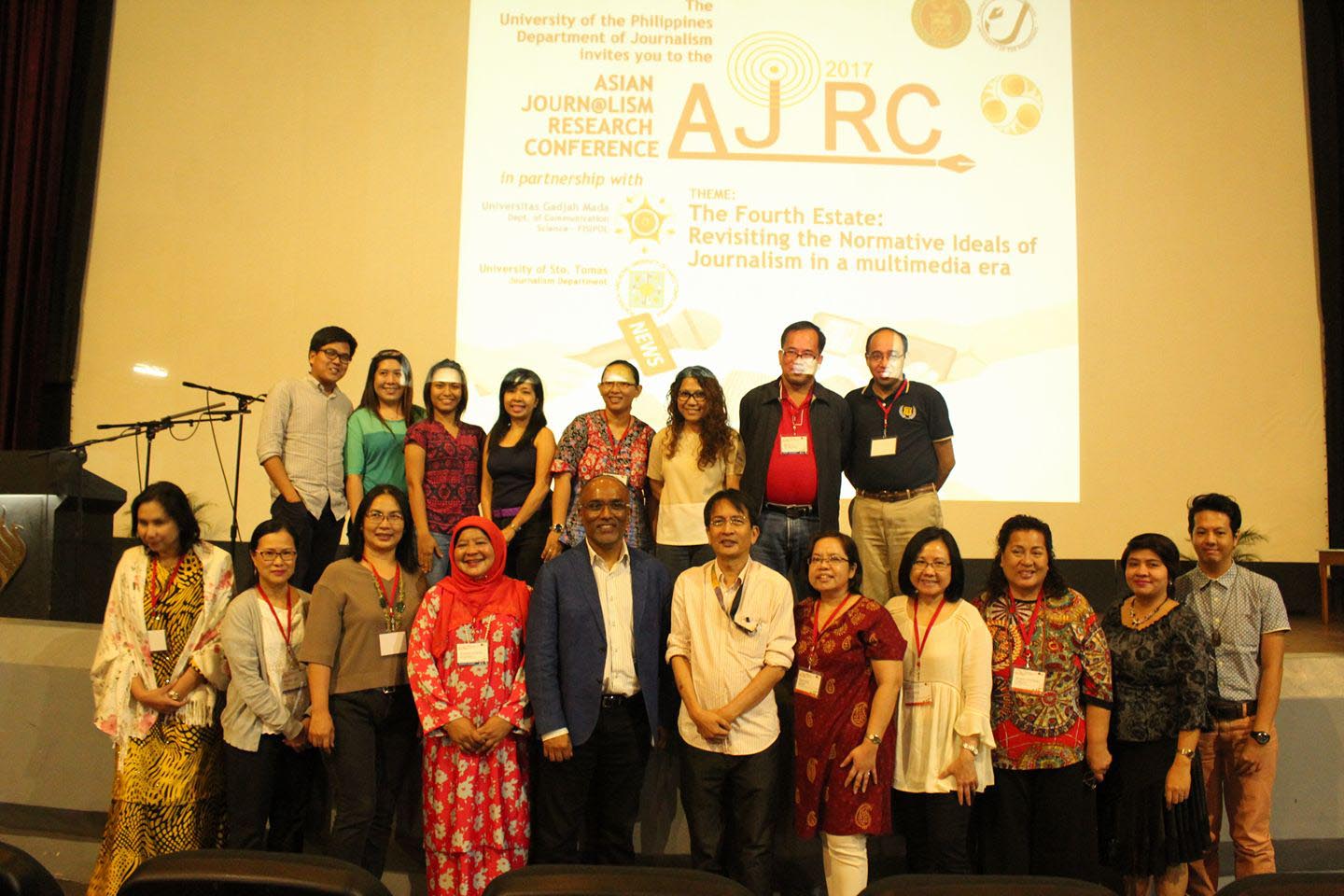 Some 300 students and faculty from various universities in thePhilippines, Indonesia, Malaysia and Hong Kong attended the first Asian Journalism Research Conference last April 24-25, 2017 at the University of the Philippines (UP), the only academic conference for undergraduate students in the region.

The conference was organized by the UP Journalism Department in partnership with the University of Sto. Tomas and the Universitas Gadjah Mada Yogyakarta, Indonesia.

With the theme, “The Fourth Estate: Revisiting the Normative Ideals of Journalism in a Multimedia Era”, the conference tackled timely issues faced by today’s journalists, such as attacks from trolls, fake news and a lack of freedom of information.

Keynote speaker and veteran journalist cum academic Dr. Cherian George from the Hong Kong Baptist University spoke about the challenges of
journalism in the so-called post-truth era. He emphasized the need to check facts now more than ever. “Facts are still facts and should be the basis of reality,” he said, adding that so-called alternative truths are simply lies. He noted that in many regimes, politicians hide behind these alternative facts persuading the public to believe in their “perception of reality” rather than the hard truths. While, Dr. Azman Azwan Azmawati of the Universiti Sains Malaysia, gave a talk on stereotyping in the news.

During the second day of the AJRC, the UP Journalism Department held its annual Chit Estella Journalism Student Research Award, named after the late Professor Lourdes Estella-Simbulan, who taught at the Department and was a trustee of Vera Files, an online news organization that practices investigative and long form journalism.

University of the Philippines students Bryan Gonzales and Celine Samson bagged the Best in Investigative Journalism Award for their
work entitled, “An investigative study on the implementation of the Barangay Anti-Drug Abuse Councils (BADACs) and its impact on local illegal drug activities.” UP students Nicole Lagrimas, Karen Macalalad and Arianne Tapao also bagged the Best in Special Projects for their documentary titled, “Ignored. Informed. Information: Dismantling health, societal hazards for Tondo’s scrap metal works”. Meanwhile, Ateneo de Manila University students Patricia Sarmiento and Stephanie Sayson won the Best in Academic Research for their paper, “A Case Study on the Visual Representations of Para-Athletes in Elite Sports Events by Print News Media and the Perception of these Portrayals of Persons with Disabilities.”

The conference was sponsored and supported by the University of the Philippines Office of International Linkages, the UP Diliman Office of the Vice Chancellor for Research and Development, the UP Diliman Office of Culture and the Arts, the University of Sto. Tomas, VERA Files, Jollibee Food Corporation, Philippine Press Institute, Prof. Roland Simbulan and family and the UP Journalism Club.