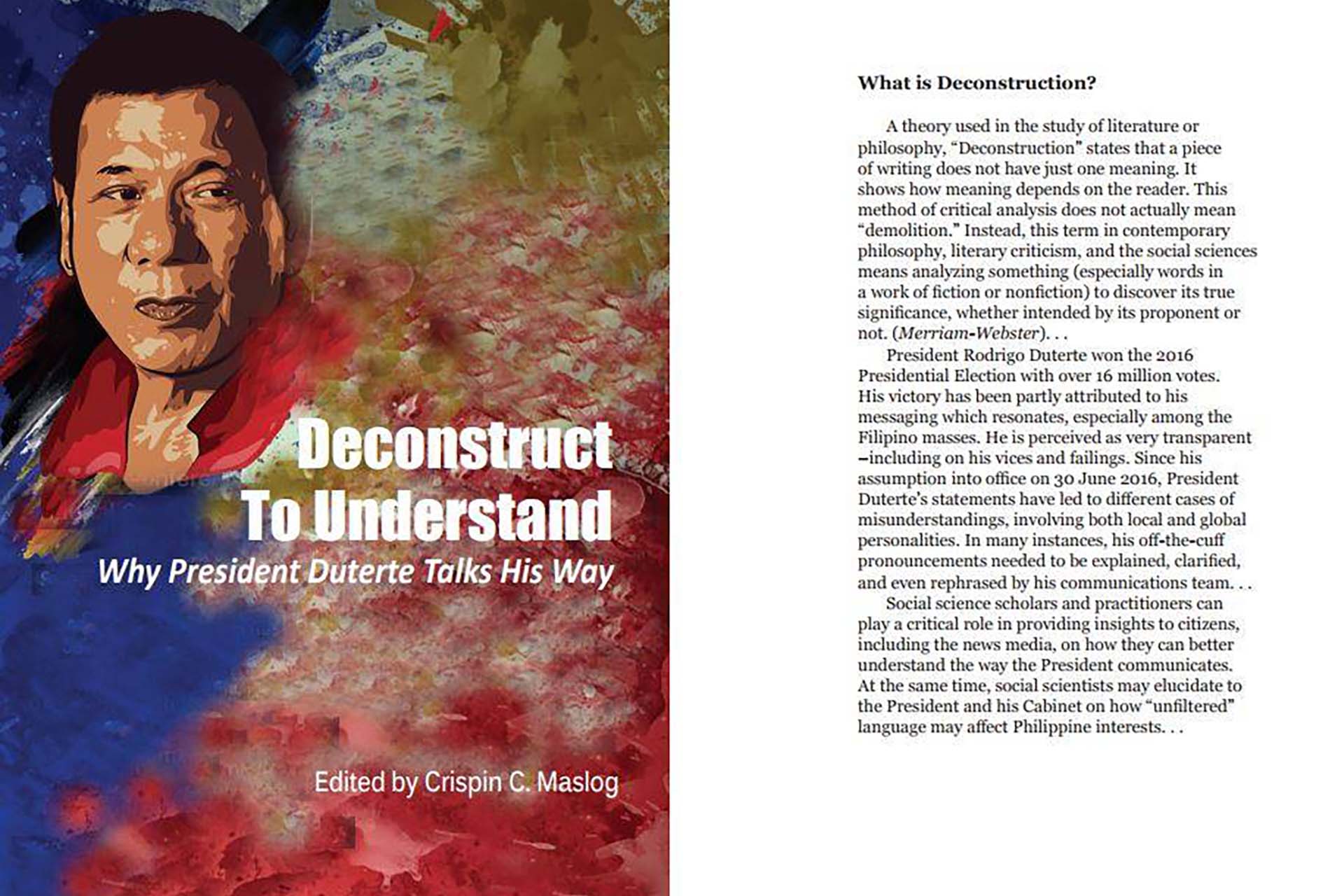 “President Rodrigo R. Duterte’s speaking style can be described as very raw — direct, unedited, no pretensions. He speaks his mind . . . how his emotions dictate him. Being open is often thought of positively; but for the President of the Philippines who is speaking to a wide audience, this poses a lot of questions . . . we often forget that our language use defines us and shapes how other people see us.”

These are the candid comments of a University of the Philippines linguistics professor, Farah C. Cunanan, Ph. D. Cunanan’s analysis of President Duterte’s controversial communication style is one of many included in a new book, Deconstruct to Understand: Why President Duterte Speaks His Way. Edited by Crispin C. Maslog, the book is being launched July 26 in time for Duterte’s one year anniversary in office at the Roundtable@Lido hosted by Mel Acuna.

The book is based on the output of a major National Communication Conference hosted by The Asia Media Information and Communication Centre (AMIC) Nov. 25 last year on the theme: “Deconstructing Toward Understanding: The Communication Content and Style of President Rodrigo R. Duterte.” AMIC is headed by Secretary-General Ramon G. Tuazon.

The book includes the brief papers of the communication experts and is an attempt at a balanced analysis of the Presidential communication style, which is controversial to say the least.

The book includes an essay by Presidential spokesperson Ernesto Abella which explains what drives President Dutertete. “By listening to what he says, one can reconstruct a consistent narrative. . . He was a reluctant candidate but ran because certain crucial national issues were not being addressed–the Mindanao peace situation, the pandemic illegal drug trade, corruption, poverty.”

On the other extreme, this criticism by National Artist and Ramon Magsaysay Awardee Francisco Sionil Jose: “The President does not realize that his greatest enemy is his own self, his mouth, because he thinks he knows all the answers. This differentiates him from Ramon Magsaysay, who . . . surrounded himself with the best minds . . . Whenever Magsaysay realized that he made a mistake, he corrected himself immediately. “

On the other hand, Presidential Communications Coordinating Office Director Martin Andanar justifies the personality of his boss: He talks of a Public Duterte—“the tough-talking mayor of Davao who forged order out of chaos, the man who rides a big bike and swears like a sailor . . . and Private Rody–a mellow fellow, an introvert pushed to the brightest stage of the land, a kindly and unassuming man driven by empathy, and a romantic visionary . . . Private Rody is the man who went to his parents’ grave after winning the election, there to weep.”
Inquirer digital edition editor John Nery raises a key question: Does President Duterte listen? “We don’t know. The former archbishop of Davao, Archbishop Emeritus Fernando Capalla, thinks that Mr. Duterte’s seeming inability to take advice or criticism is precisely the problem. . . If he can only listen … listen to other people. Last week, I heard an ambassador summarize an overview of the national situation through a plaintive question: Is there anyone the President listens to?”

Deconstruct to Understand is an attempt by the editor and the authors in the book to deconstruct Duterte’s language in order to make sense of it. Deconstruction is a method of analysis that states that a piece of writing does not have just one meaning. It shows how meaning depends on the reader.
This method of critical analysis does not mean “demolition.” In contemporary philosophy, literary criticism, and the social sciences, deconstruction means analyzing something to discover its true significance, whether intended by its proponent or not.

The 100-page book, published by the Asian Institute of Journalism and Communication (AIJC), is available at AIJC and will be sold in Solidaridad and Metro Manila bookstores at P200 a copy. ###