‘They treated me like I murdered someone’: Lockdown arrests mark 1st year of PH pandemic response

‘They treated me like I murdered someone’: Lockdown arrests mark 1st year of PH pandemic responsePCIJMarch 16, 2021March 19, 2021 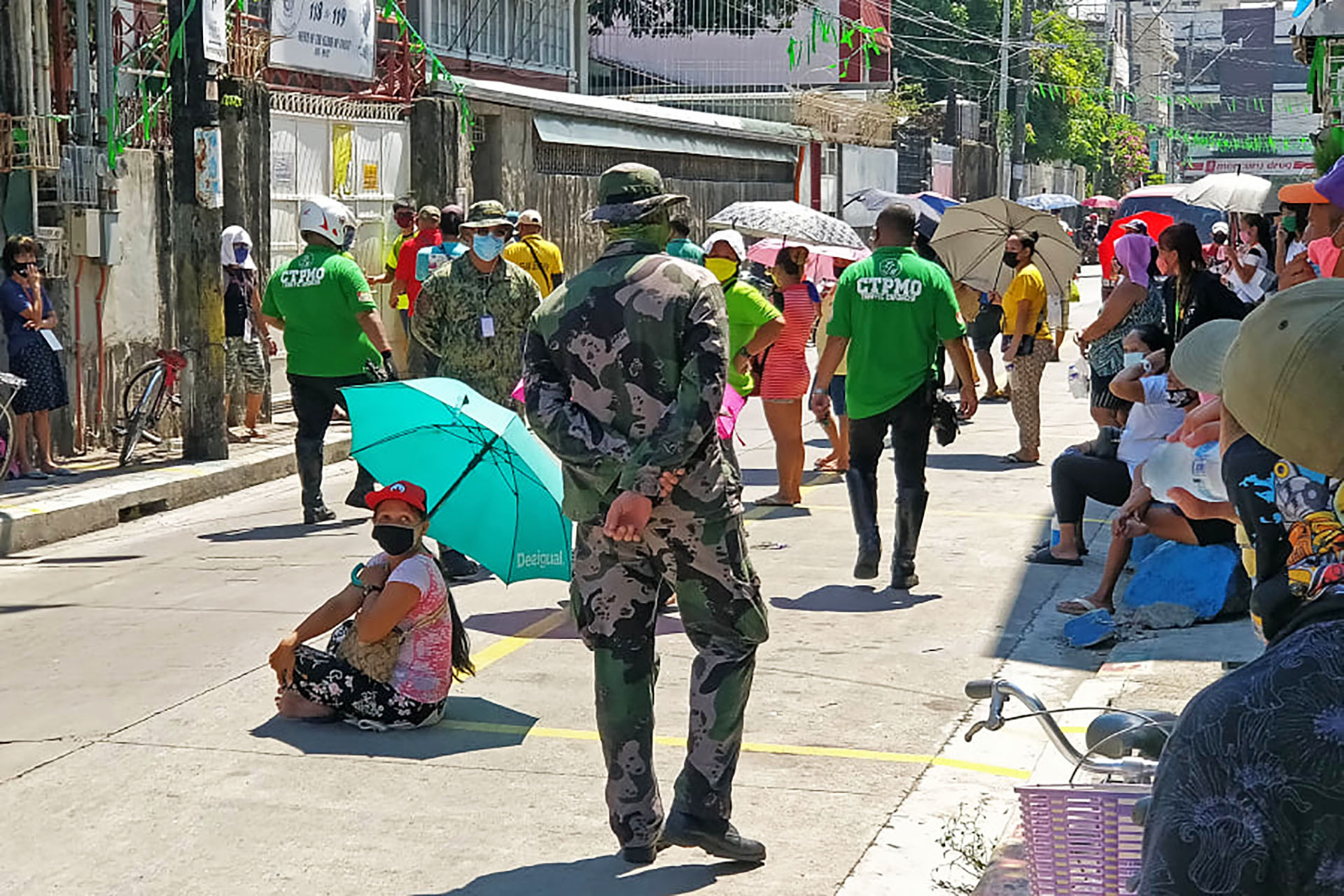 Fines from lockdown arrests have bled poor Filipinos dry while the rich and famous get wrist slaps for similar offenses. Calls for a different approach grow louder as the pandemic lockdown enters its second year.

Hunger pains hit Erwin Macahig, 30, at an inconvenient time on a hot and humid evening in the slums of Navotas.

It was 9 p.m. on April 8, 2020, an hour past the city-imposed curfew that took effect roughly two weeks after the country’s Covid-19 infections began to rise and the Philippine capital was put on lockdown. The city streets turned into a ghost town manned by cops and soldiers in camouflage uniforms. The poorly lit alleys where Macahig lived seemed even darker in the silence of the night.

He was walking toward a sari-sari store when someone grabbed his wrist from behind. A cop. Three of his neighbors – out on the streets like him – were rounded up as well.

The cops were accompanied by barangay officials who were jittery about Covid-19 spreading in the village and wouldn’t tolerate excuses that night from residents who violated the curfew ordinance.

After getting a swab test at a public hospital, Macahig and the three other men were taken to a school where they were to be detained for the next 30 days for “simple disobedience” – unless they could post bail worth P3,000. For someone who had just been retrenched, the amount was a fortune that was impossible to raise in the middle of a pandemic.

“We did not receive financial aid from the government. Our food supply was only a few canned goods and three kilos of rice for a month. And they want us to pay a P3,000 fine? Where are we going to get that money? Frankly, they just made our difficult situation tougher,” Macahig told the Philippine Center for Investigative Journalism (PCIJ) in Filipino.

Getting a criminal record for a mere attempt to buy food was beyond Macahig’s imagination.

“I don’t deny committing violations but why did they have to treat me like I just murdered someone?” he said.

Lockdown arrests marked the early months of the Philippines’s response to the coronavirus pandemic. Police Task Force Covid Shield has not released the total number of Filipinos arrested, detained, or fined one year since the lockdown began on March 15, but it was already at 100,000 as of September 2020.

Police Major General Marni Marcos, chief of the Directorate for Investigation and Detection Management, has yet to respond to PCIJ’s requests for data.

The punitive response has drawn a lot of controversies. In Santa Cruz town, capital of Laguna province, curfew violators, including children, were locked up in a dog cage. In Dasmariñas Village in Makati City, a Spanish national was declared an “undesirable alien” who could no longer return to the country, after an altercation with cops over mask rules. In Quezon City, a former soldier with mental illness was killed by cops after a commotion near a quarantine control point.

Many ended up in packed detention centers, which health and jail experts said were among the worst places to find one’s self in during the pandemic. They called them “breeding grounds” for Covid-19, where detainees were at risk of being exposed to the disease that the government has been trying to protect them from.

In Navotas, about 1,000 people were cramped in the school where Macahig was detained. Fifty violators shared one classroom, he said. At night, they slept on cartons on cold floors. There were no provisions for food, soap, alcohol and potable water, he said.

“I was more afraid of contracting the virus there because we didn’t comply with health protocols in the school at all. Detainees only wore face masks and followed social distancing rules when a high police official arrived for inspection,” Macahig said.

They were later transferred to an open space – a covered court behind the school building – after the school was converted into a quarantine site for suspected Covid-19 cases.

His friends and family – all of whom were financially knocked out by business closures themselves – eventually raised funds for his bail. “They did it out of pity. Some donated P20; others P100,” he said.

Macahig was released on April 23 after he paid the fine. He pled guilty before a municipal trial court. 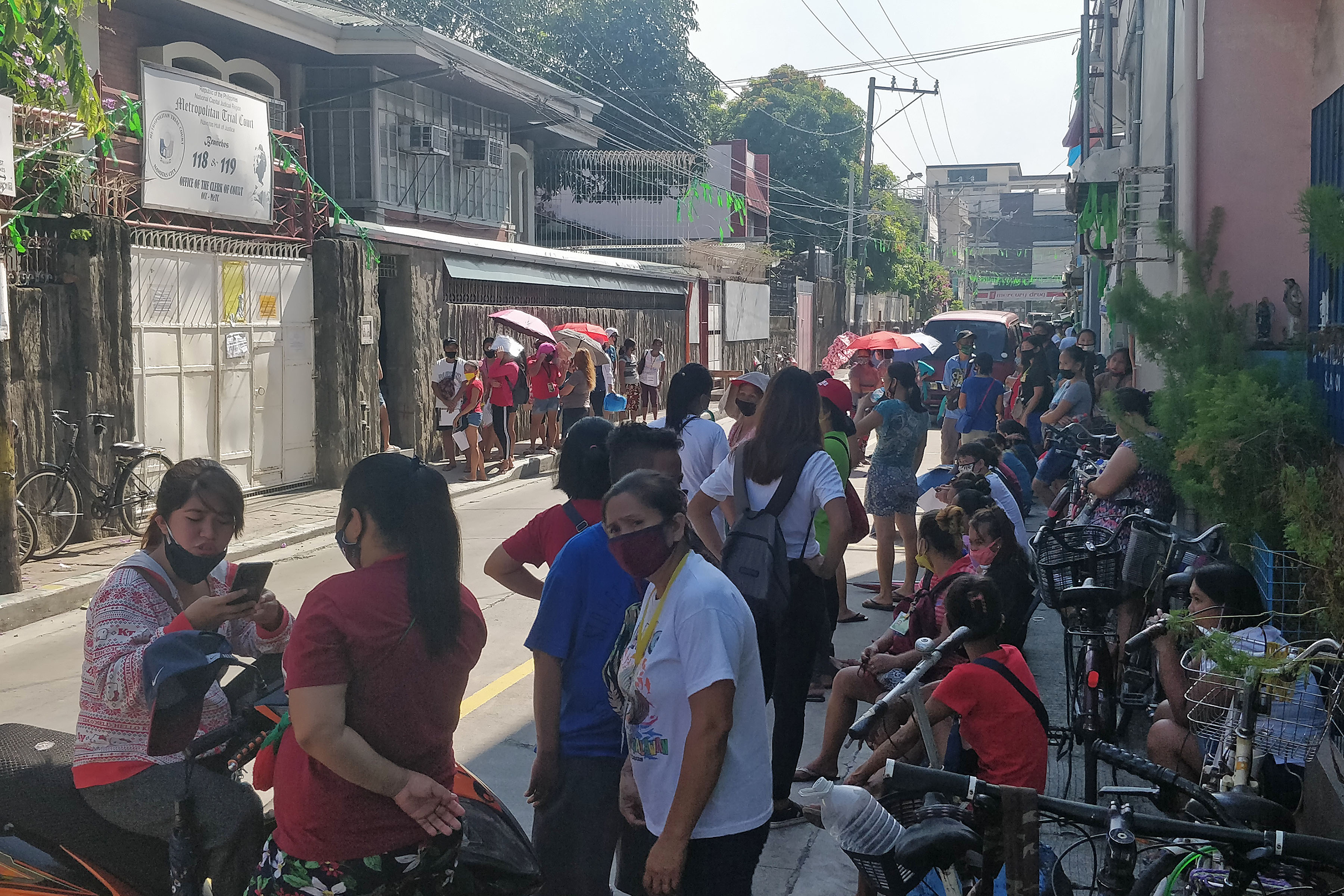 Relatives of quarantine violators wait outside the Navotas Metropolitan Trial Court to get their kin out of detention. There was a narrow window for the processing of release documents, 8 a.m. to noon, as working periods were shortened because of the pandemic. Photograph: Vincent Go

‘My family thought I was dead’

Other than imposing curfews, local governments also issued travel passes to limit the number of people allowed to go out even during day time. Those who didn’t have passes were arrested, too.

But Caloocan fish vendor Joseph Jimeda, known to many social media users as “Mang Dodong,” said he was arrested despite having a travel pass.

He was travelling to neighboring Navotas with friends to buy fish that they could sell in the market when the police took them on suspicion they didn’t have travel passes. Jimeda said he begged the cops for compassion because he had a four-year old at home and his wife had a cataract and could barely see.

“We kept explaining that we have them (about the travel passes), but the cops never listened to us. They just wanted to arrest people,” Jimeda said in an interview.

At the detention center, Jimeda received smacks and punches from authorities, instead of food and help. He could not inform his family of his whereabouts because he did not have a mobile phone at that time. The police did not help him. “All the while my family thought I was dead,” he said.

Jimeda was detained in the same covered court in Navotas several weeks after Macahig was released. Again, there was not enough food for the growing number of detainees. Those who didn’t receive visitors often suffered from hunger, he said.

“‘Yung iba akala mo patay-gutom (You’d think the others were destitutes),” Macahig said. “Some of them will join you in your meals uninvited. It’s embarrassing to shoo them away.”

Jimeda was released on May 19 after 12 days in detention. 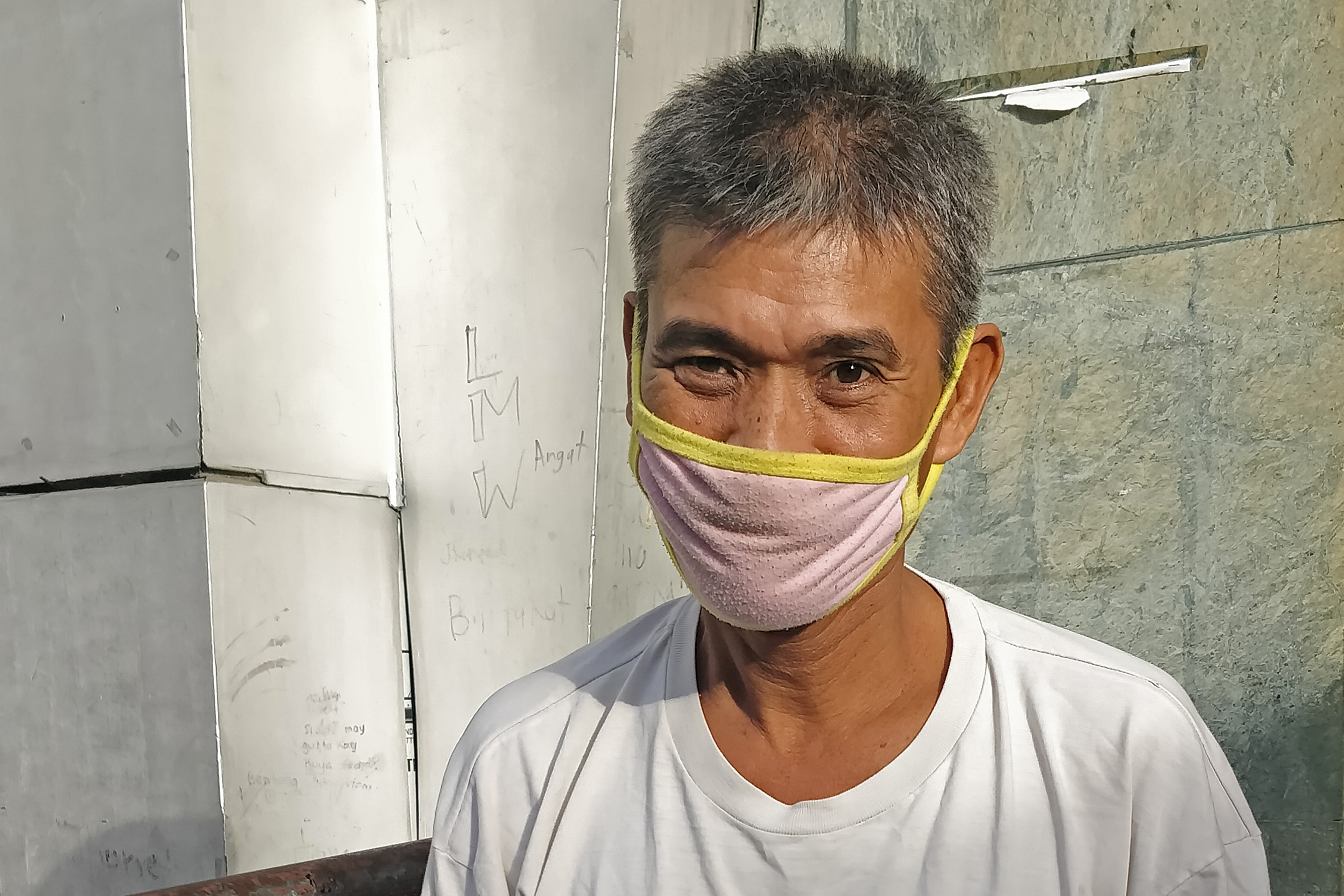 Photo shows Mang Dodong in detention  at the enclosed Navotas Sports Complex on May 14, 2020. The sports complex served as a detention center for quarantine violators. Photograph: Vincent Go

No money to pay fines

Those who couldn’t pay the fines had to stay longer in detention.

Randy delos Santos, a coordinator of the church group Paghilom led by Fr. Flavie Villanueva, said several people from the slums have sought financial assistance from their office in Manila since April of last year.

They had similar complaints: Being fined and arrested for violating quarantine rules.

The penalties ranged from P250 to P50,000, depending on the type of violation alleged and the city where it was committed.

Delos Santos said the calls for help usually came from people in Navotas, Manila and Caloocan.

Delos Santos said there should be a shift in policies because fines imposed by ordinances that were passed to address the health crisis were bleeding the poor dry and sending them into deeper debt.

While the poor suffered fines and long days in detention centers for finding ways to fend off their hunger, the past year has shown that the rich and powerful can hold parties and receive token wrist slaps for their violations.

In the early days of the pandemic, Makati Medical Center castigated Sen. Aquilino “Koko” Pimentel III for breaching quarantine protocols when he brought his pregnant wife to the hospital while he was waiting for the results of his test for Covid-19.

Philippine National Police chief Debold Sinas was caught holding a birthday party inside Camp Aguinaldo, while the president’s spokesperson, Harry Roque, visited a marine park in Subic. There were no repercussions for the two despite the ban on mass gatherings and unessential travel.

CJ Search: Gesmundo has ‘no objections’ to releasing SALNs, Bernabe limits it to summaries

A different approach is needed

Carlos Conde, researcher for Human Rights Watch in Asia, said local governments must rethink “anti-poor policies” such as sending people to jail for breaking health protocols and fining violators who are obviously penniless.

“No one should spend a night in jail for violating quarantine rules. That’s inhumane,” Conde told PCIJ.

Conde said that instead of arrests and fines, the local government should channel their efforts into a massive information drive for the public to better understand the dangers of the virus that has so far killed two million people worldwide.

Political science professor Maria Ela Atienza said the government should train its sights on harnessing “bayanihan” or community spirit among Filipinos instead of imposing a culture of crime and punishment to address the pandemic. The public needed to be encouraged to take care of themselves in order to take care of one another, she said.

Atienza said the government’s message was “people should just follow rules” instead of  “the government is doing its best to make sure we have enough resources for public health and we are tying our best to support those who were economically dislocated as a result of the lockdown and we need the help of everyone to help each other.”

“The language is not focused on the cooperation of people, it’s more about getting them to follow. Otherwise, you’ll be meted with punishment. It’s (the government narrative) not for a country that’s supposed to be democratic,” she said.

To encourage better public participation, Atienza said efforts must be exerted to ensure that the law applied equally to the rich and the poor.

“The pandemic and the response of the government… exposed the inequality not only in Philipine politics but in Philippine society where you have senators and other officials, even police personnel, who violate the lockdown restrictions but at the same time they are not penalized,” she said

“But you have fish, vegetable vendors and jeepney drivers trying to find alternative sources of income penalized heavily. So you also see inequality in terms of enforcement of lockdown rules and accountability on the part of government officials,” she added. 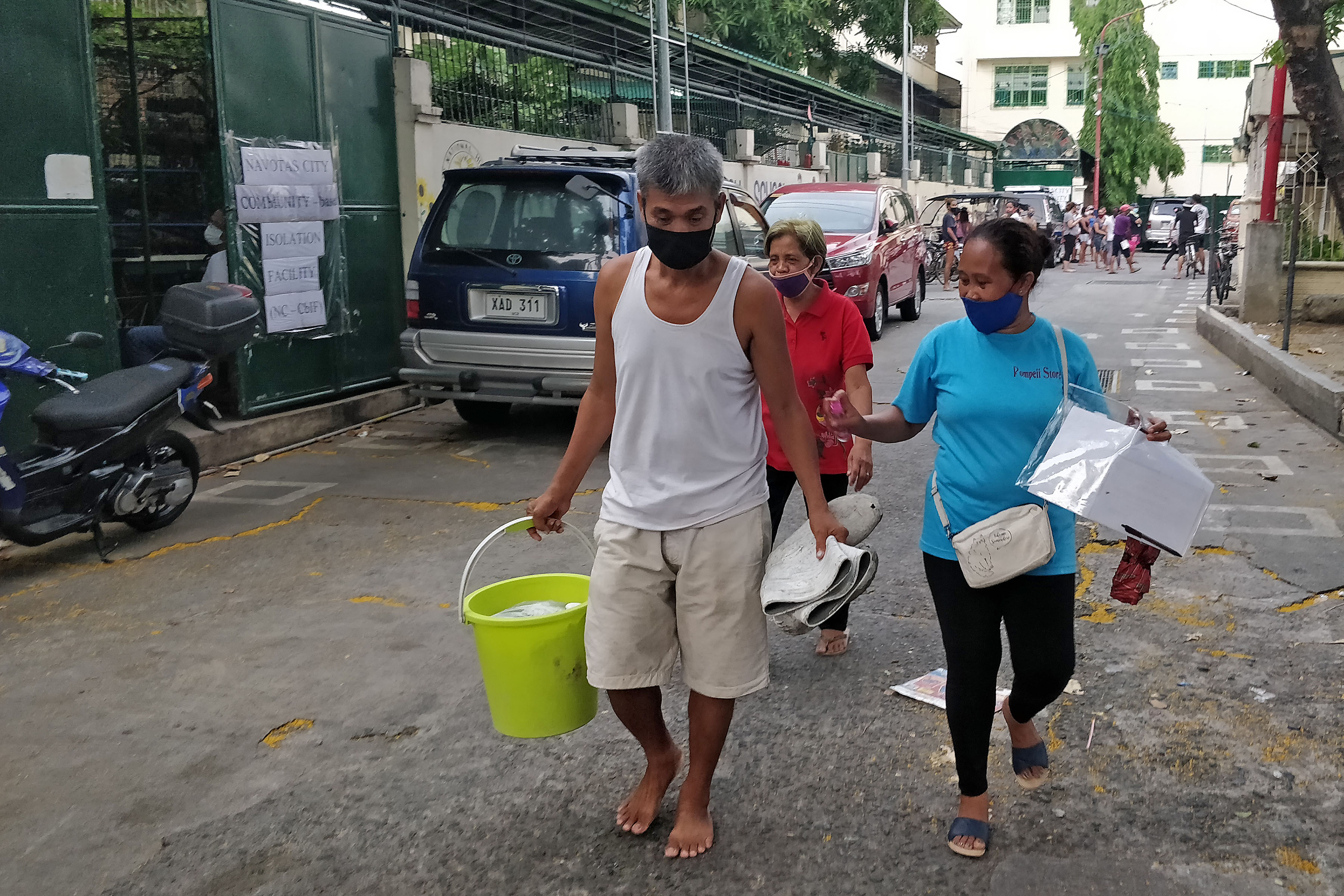 Mang Dodong finally on his way home, late in the afternoon of May 19, 2020. Photograph: Vincent Go

One year after the Philippines went into lockdown, data from the World Health Organization showed the country as having the worst coronavirus performance in the Western Pacific Region, with a total of 611,618 infections and 12,694 deaths as of March 14.

Infections are rising again, hovering between over 2,000 to nearly 4,000 new cases a day in recent days after months of recording less than 2,000 daily new infections on average. Metro Manila mayors have again imposed uniform curfew hours, from 10 p.m. to 5 a.m., beginning March 15.

The punitive response cannot continue, said Macahig. “The government should find better solutions. It needs to stop imposing fines that only makes the poor poorer. We’re in the middle of a pandemic yet they keep milking us for money.”