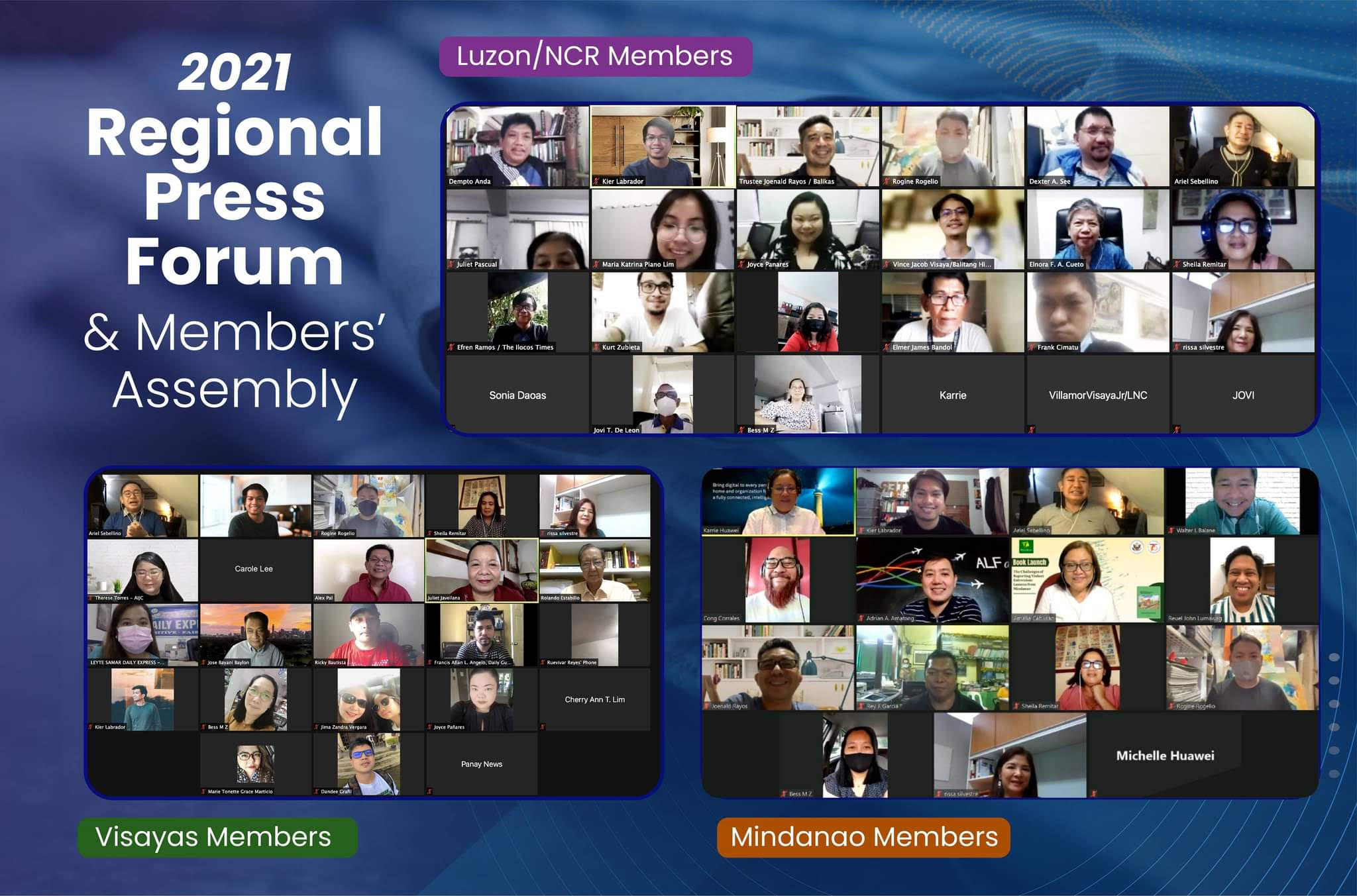 Six regional trustees of the Philippine Press Institute (PPI) were re-elected during its annual members’ meetings and regional press forums on June 7, 9, and 11 via Zoom.  Four Board officers also retained their positions.

Mindanao Times editor-in-chief Amalia Montecillo Bandiola and Mindanao Observer managing editor Adrian A. Amatong were re-elected for another as trustees for Mindanao.

Retaining their positions as Board officers are: Manila Standard publisher Rolando Estabillo as chairman-president, Cabusao as vice-president,Rayos as treasurer, and See as corporate secreta ry.  Joining them as trustees are Philippine Daily Inquirer’s associate publisher Juliet Javellana, Al Pedroche for both Pilipino Star Ngayon and The Philippine Star, Malaya Business Insight’s Monica Macasaet, Gus Villanueva from the Journal Group of Publications andJoyce Pañares from Manila Standard who is currently seminar director.

Both Estabillo and Sebellino lauded the regional trustees and members for “keeping up with the times, especially because the pandemic took a toll on the survival of the newspapers”.  They vowed to keep the institute relevant in the age of social media and infodemic,  and responsive to the needs of its members through its current programs and digitalization project.

“This pandemic has allowed us to do introspection of the kind of work we do and recalibrate our efforts towards helping our community newspapers survive,” Sebellino said.

Estabillo addressing the members nationwide and setting the tone of the assemblies, encouraged them to be active and participate in the news-sharing platform www.ppinewscommons.net. “This is by you and for you. Eventually, you will earn from this via a cooperative.”

In the three online assemblies and forums, Therese San Diego Torres of the Asian Institute of Journalism and Communication (AIJC), PPI’s long-time project partner and implementer,  presented the revised and expanded Code of Professional and Ethical Conduct in Covering Elections which was crafted in 1998 by the PPI’s Philippine Press Council (PPC) under the tutelage of then officers Malou Mangahas and Chuchay Fernandez.

The three separate events were made possible through an on-going partnership with Nickel Asia Corporation (NAC) with support from Hanns Seidel Foundation (HSF).  Both are institutional partners.

The Philippine Press Institute is on its 57th year.