No votes cast for lumads in evacuation center 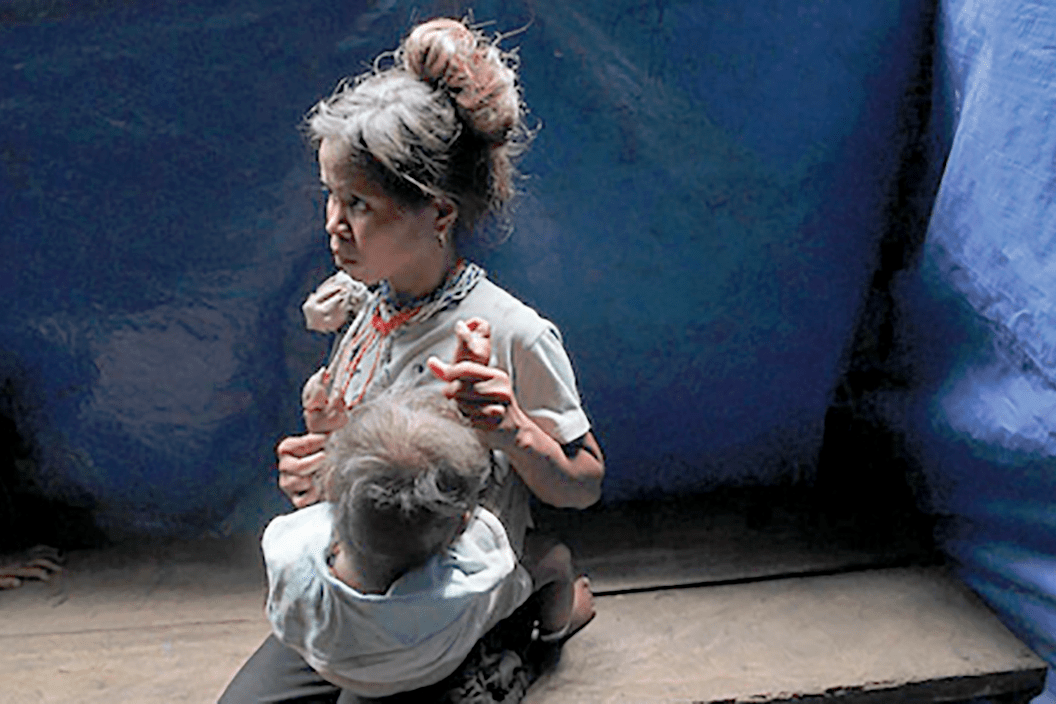 This story, originally published by Mindanao Times on April 30, 2016, was made possible through a PPI grant intended to help journalists from member publications to explore both unreported and underreported stories under the Philippines elections. As the following article shows, the plight of Lumad who were desplaced from their communities and therefore would not be able to take part in the coming vote, despite their eagerness to do so and hopes for a better life under a new set of leaders, is sadly, one such story. Please read on.

“All I hope is peace. No armed men in our community and children in school.”

This is the dream of Sheena Balite, 11, from the Ata-Manobo tribe of Talaingod, Davao del Norte, for the next set of local officials to accomplish.

Life has not been easy for Sheena. Her family which is composed of his father and three mothers, 13 siblings, has to leave their community and temporarily take refuge at the UCCP Haran compound.

Her trials were also experienced by Nelin Sampag, 31, a resident of Kapalong, Davao del Norte, a mother of three kids.

About 800 individuals are now temporarily seeking protection in the UCCP Haran compound. Of the 800, 300 are children and the remaining 500 are adults. All the adults cannot cast their votes on May 9.

Sampag, a registered voter since 1990’s, said that she wanted to cast her vote to elect a president that could help them attain peace in their villages for the future and safety of her children.

INFOGRAPHIC. The figure of the Commission on Elections showed that Davao Occidental has the highest number of registered indigenous people in the region with 5,707, followed by Compostela Valley with 2,236, Davao del Sur with 2,000, Davao del Norte with 317, then Davao Oriental with 79 registered lumads.

But she will not take the risk to return to their community to vote.“Going back home is dangerous, I just want my family to be safe from violence and we will not be returning until our community is secured, but I hoped that the winning candidates will adhere to the appeals of the lumads,” Sampag said.Meanwhile, Datu Kaylo Buntolan, of Talaingod, was worried if he will be delisted from the records of the Commission on Elections (Comelec) as he is also among the evacuees who might not be able to vote in the coming May elections.“Since I know that I cannot vote because I am staying here at Haran for my security, I am concerned with my records from the Comelec,” said Buntolan adding that “what will happen to my records?”

LUMAD REFUGEES. Six out of 100 lumads were evacuated from their homes as they were driven away by the alleged militarization and now currently taking shelter at the UCCP Haran.

Lumads’ disenfranchisementLawyer Marlon Casquejo, assistant regional director of the Comelec 11, said that displaced lumads will not be automatically disenfranchised because a voter will be deactivated if they fail to cast their vote in the last two elections.“The same process as with any other registered voter. We are guided by our own Comelec rules that if a person failed to vote twice then that person is due for deactivation from our records,” Casquejo said.

TATA Manayab breastfeeds her 2-year old son Demon while waiting for medical attention inside a makeshift clinic at UCCP Haran compound, Padre Selga Street, Davao City on February 24, 2016. Demon suffered burns in his hands and face after unidentified men torched their camp where they are seeking refuge. MindaNews photo by TOTO LOZANO

The data of the Comelec showed that there are 10,339 indigenous people who are registered in davao Region.

Comelec Commissioner Luie Guia, during the 9th Congress of the National Union of Journalists of the Philippines (NUJP), earlier said that they are trying to resolve the case as the numbers of the IDPs are substantial enough to swing polls.

However, Casquejo told TIMES that the Comelec failed to stretch the law for the lumads since based on the law it does not consider the natural mobility of people such as migrant workers and students, as well as internally displaced persons, or those forcibly dislocated by disasters or conflicts.

Under the Omnibus Election Code, voters can only fill in the ballots at the precinct where they are registered, except for some special circumstances such as the local absentee voting program.

Casquejo also hoped that the displaced lumads could vote since many of them want to return home and their participation in the election is very important so they could elect their local official who could help them but they are afraid of the attacks and the poll body cannot force the lumads to go back to their community because the poll body could not assure their security.

People in Haran are not displaced

But lawyer Geroncio R. Aguio, regional director of the National Commission on Indigenous Peoples-11 (NCIP-11), said that lumad refugees in Haran are not displaced and the attacks in their community are not true.

Aguio added that since the lumads went to the Haran they had been convincing them to return to their homes as the NCIP could only give their assistance to the lumads in their official domain.

On the other hand, Aguio stressed every lumad should cast their vote because right to vote is not only part of their Indigenous Peoples’ Rights Act (IPRA) law but also their constitutional right.

“Joining in the election is very beneficial to the lumads especially if they could unite their votes so they could claim in the next elections that their sector is important as it could be converted to vote,” said Aguio adding that “voting is also empowering kay mag ka-voice ang IPs and kung empowered na sila kay ang elected official always cater to people who believed that can deliver or who can put them into office.”

Aguio also desired that the lumads in this coming election will not be used by the running candidates because they could be easily lured by the promises during campaign period.

Davao Region safe or not

However, based in the report of the Police Regional Office-11 (PRO-11) there are 36 areas of concern composed of two districts, 31 municipalities and three cities in the region for the May 9 election.

Talaingod and Kapalong Davao del Norte are the places where the displaced lumads came from.

According to the police guidelines, an area is placed in the election watchlist if the area where there’s a high probability of politically motivated violent incident, when the political rivalry is intense, and when there’s presence of armed groups, Dela Cerna said.

Meanwhile, Maj. Ezra Balagtey, spokesperson of Eastern Mindanao Command, said that soldiers are already deployed in the area in the area to address possible threats that may arise during the election.

Balagtey also assures the public that they would do everything for the safety on May 9 because they are closely monitoring the election hotspots.

Despite all the atrocities in the hinterlands, Sheena is still hopeful that their communities will be secured from the threats and that she will become a teacher to help the other lumads.

“Aside from peace, I also dream of being a teacher to help my fellow lumads so we will be educated and nobody could exploit us,” she said.