PPI Board in Kapihan, re-affirms ‘no to fake news’ 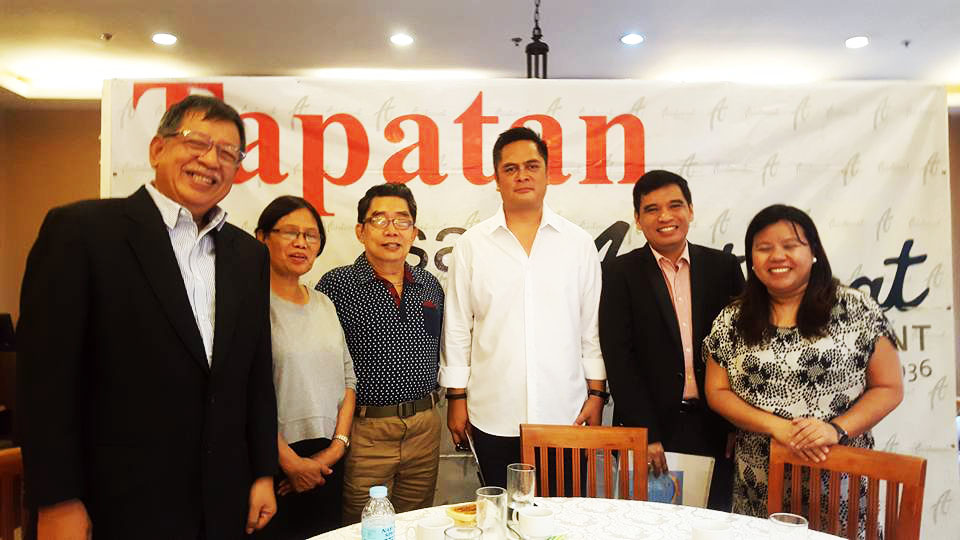 Coming at the heels of its scholastic press seminar-series on "Let's Get Real on Fake News", the Philippine Press Institute (PPI) sat in the panel at Tapatan sa Aristocrat, a regular Monday Kapihan organized by seasoned journalist Melo Acuna. PPI chairman-president Alfonso Gomez Pedrochejoined other panelists Prof. Danilo Arao of the University of the Philippines-Diliman College of Mass Communication, Ellen Tordesillas of Vera Files, and Communications Secretary Martin Andanar in the forum on "Fake News, Media Trends and Media Ownership" moderated by Acuna and Sky Ortigas.

The PPI is exploring a 'partnership' with Acuna for some topics it can recommend for his Kapihan.

The scholastic press program is being supported by Nickel Asia Corporation (NAC). The last two remaining legs this year will be held in the cities of Bacolod and Dumaguete.

This was followed by the PPI Board's regular meeting. Discussed were the organization's training programs and partnerships. 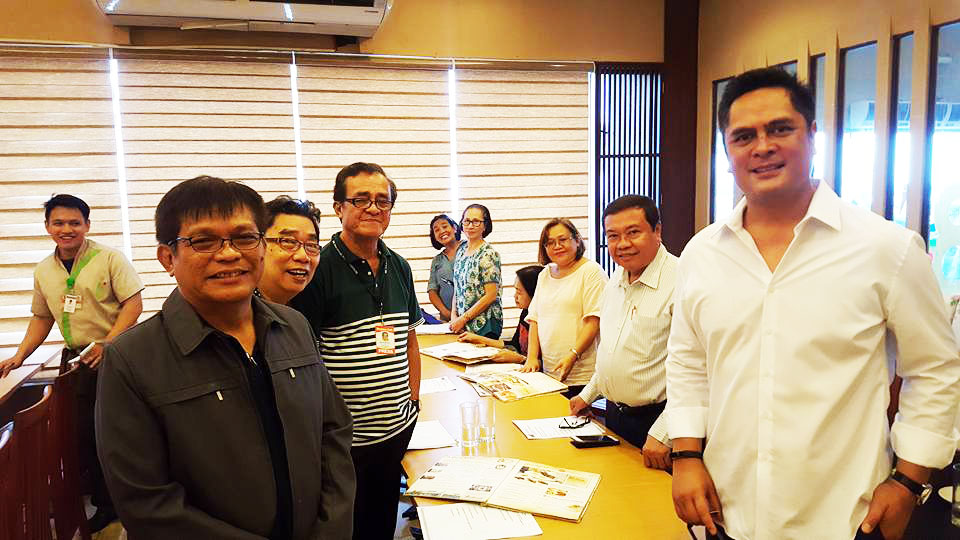 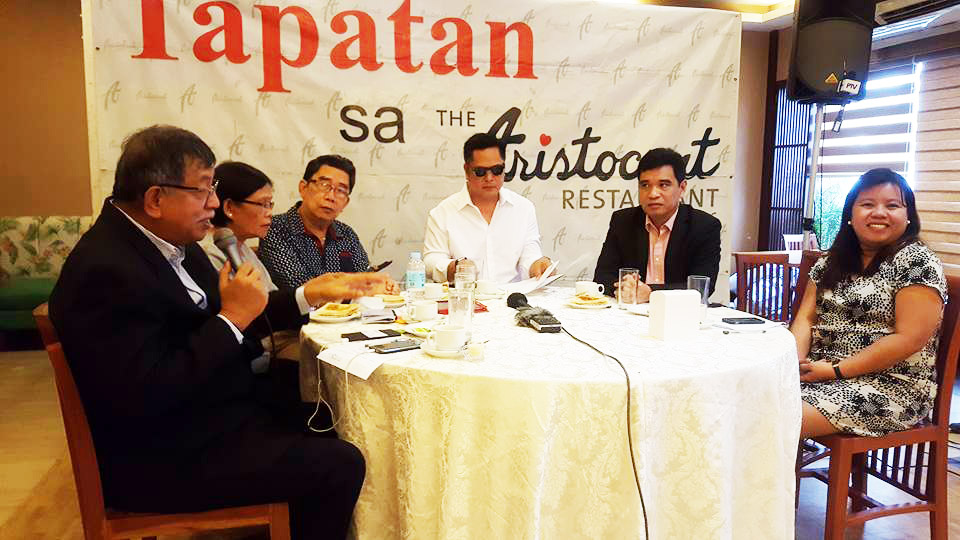 No to Fake News 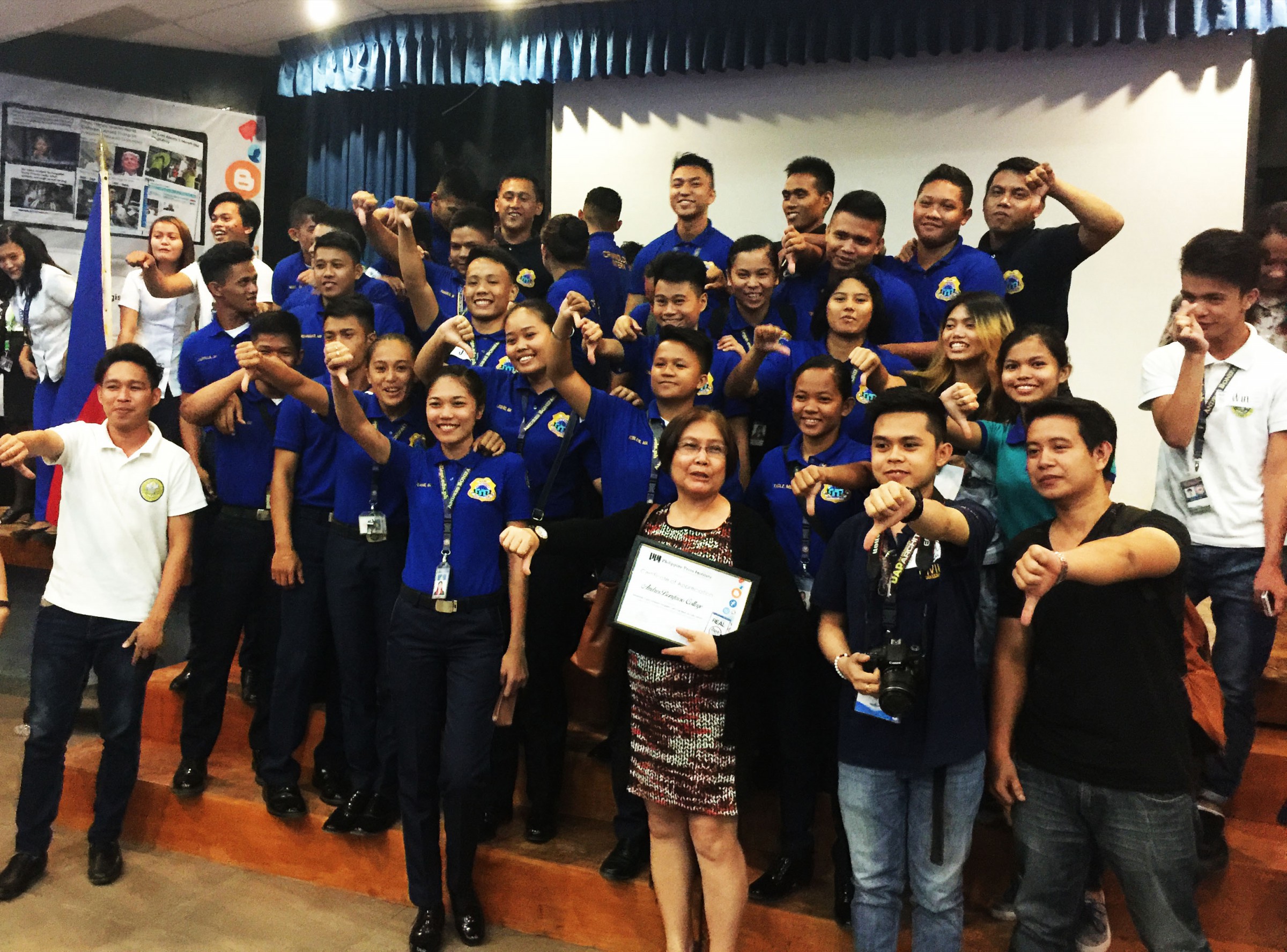 NO TO FAKE NEWS. Criminology students do the thumb-down sign at the scholastic outreach program on "Let's Get Real on Fake News" at the Andres Bonifacio College in Dipolog City. They were among the 240 participants from 6 schools who attended the seminar organized by the Philippine Press Institite (PPI) with support from Nickel Asia Corporation (NAC). The final legs will be held in Bacolod and Dumaguete. (Photos by Kier Labrador of PPI) 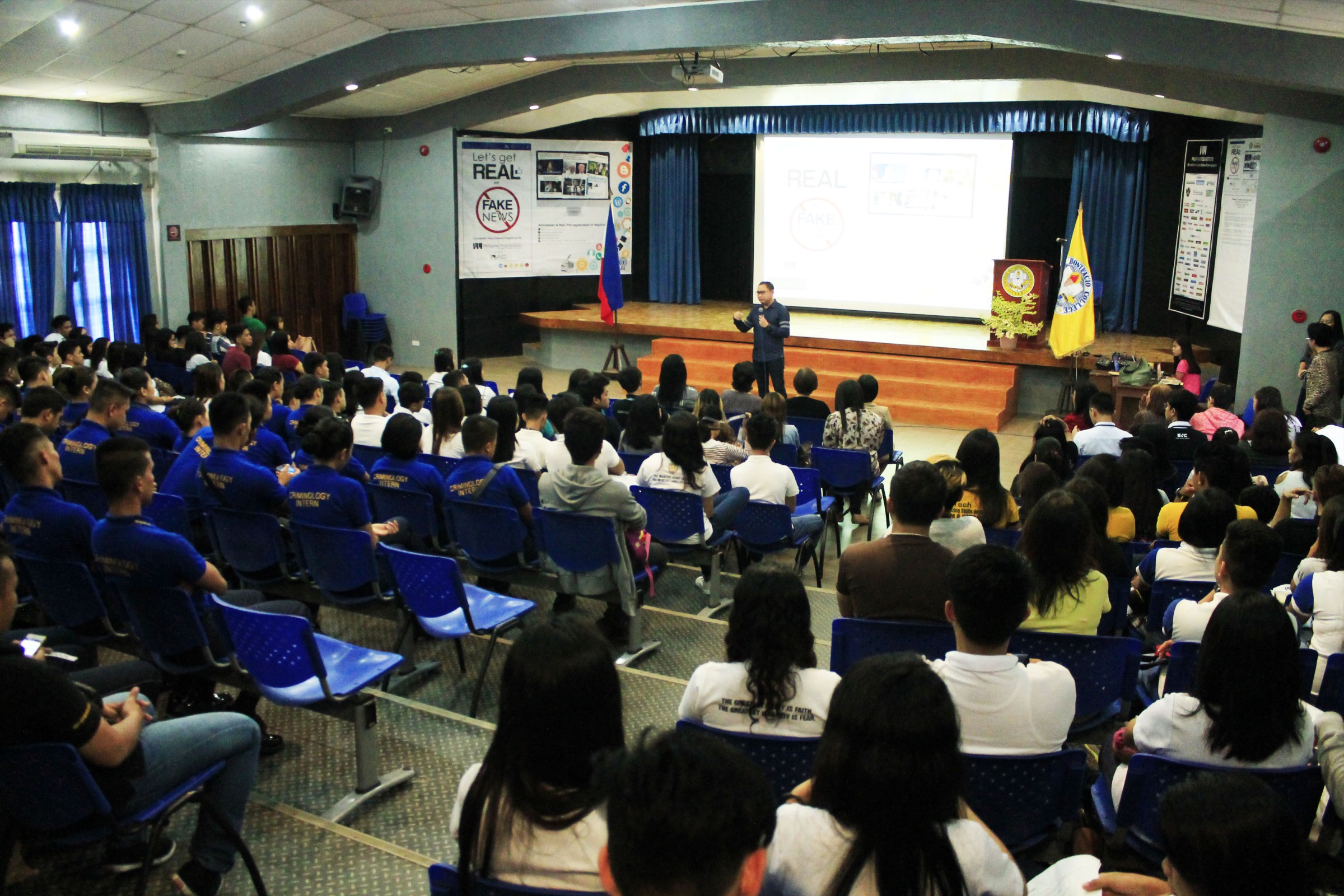 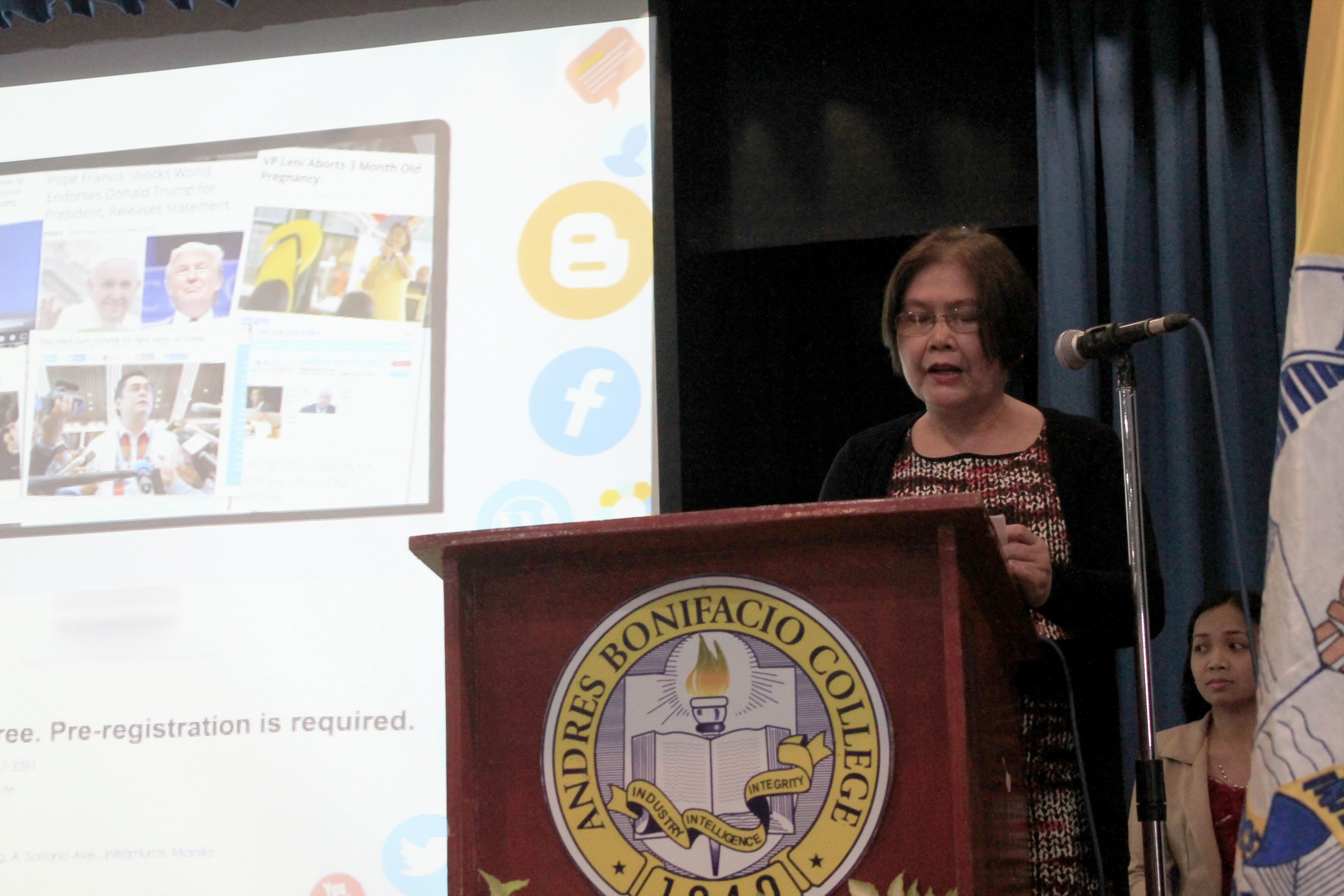 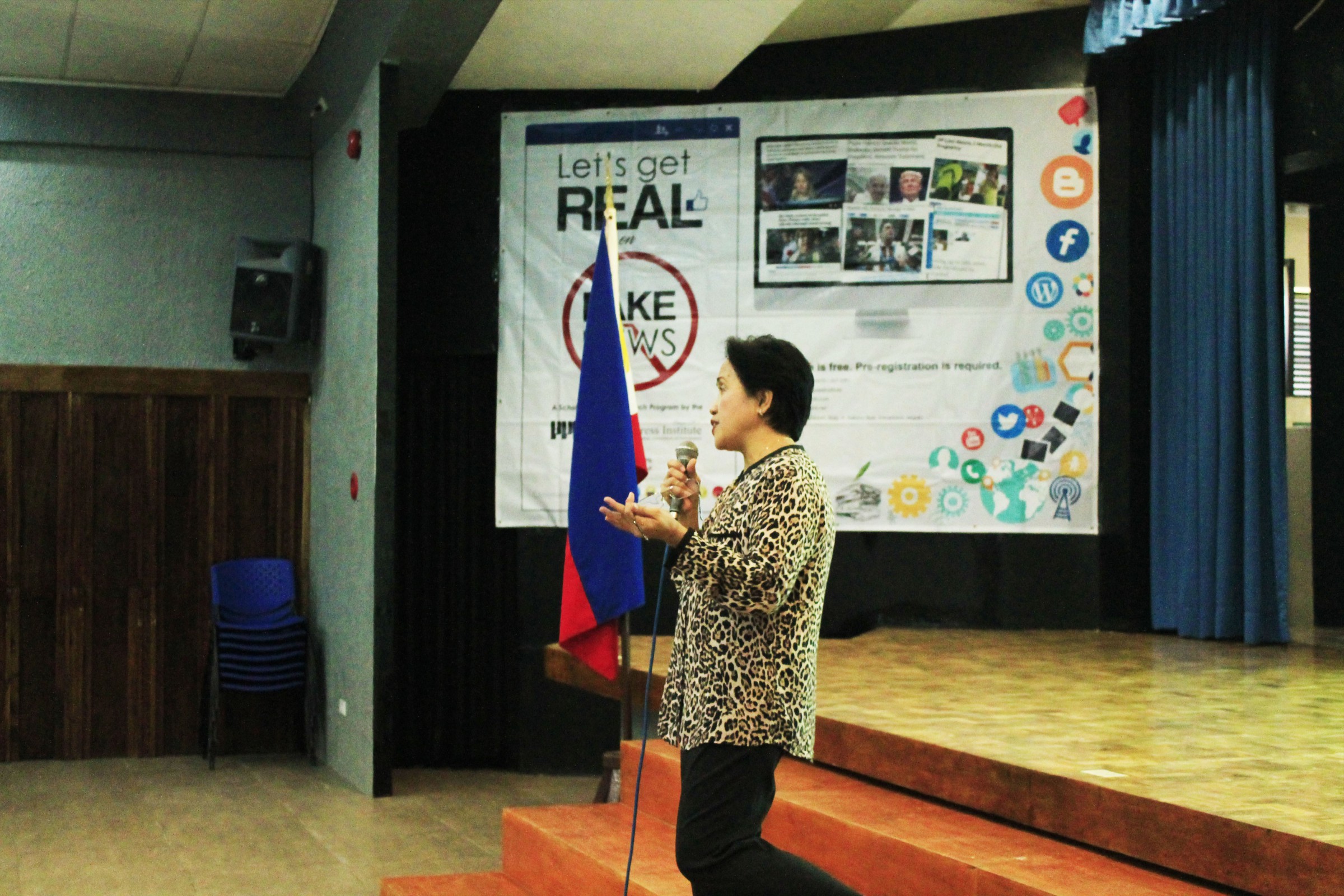 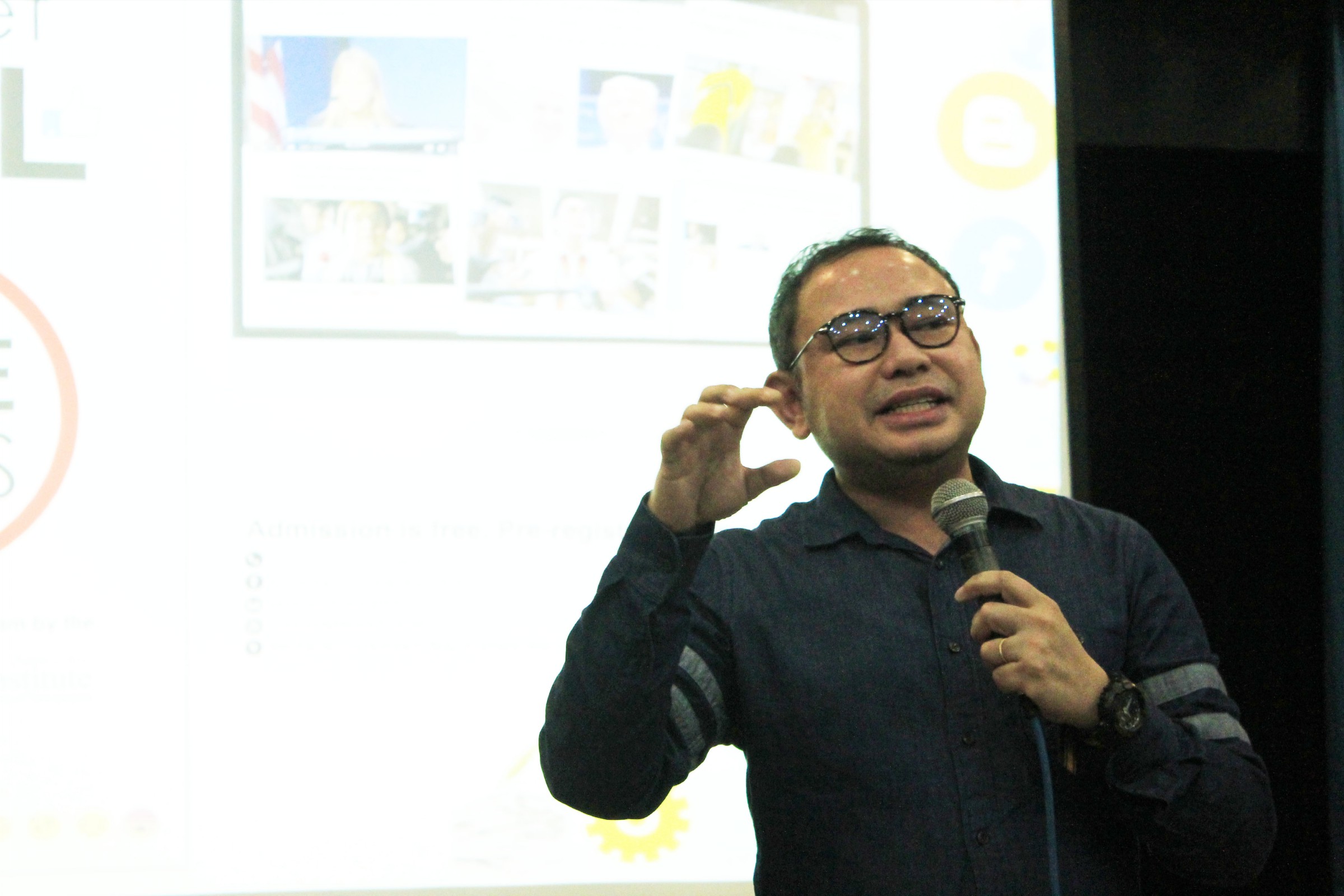 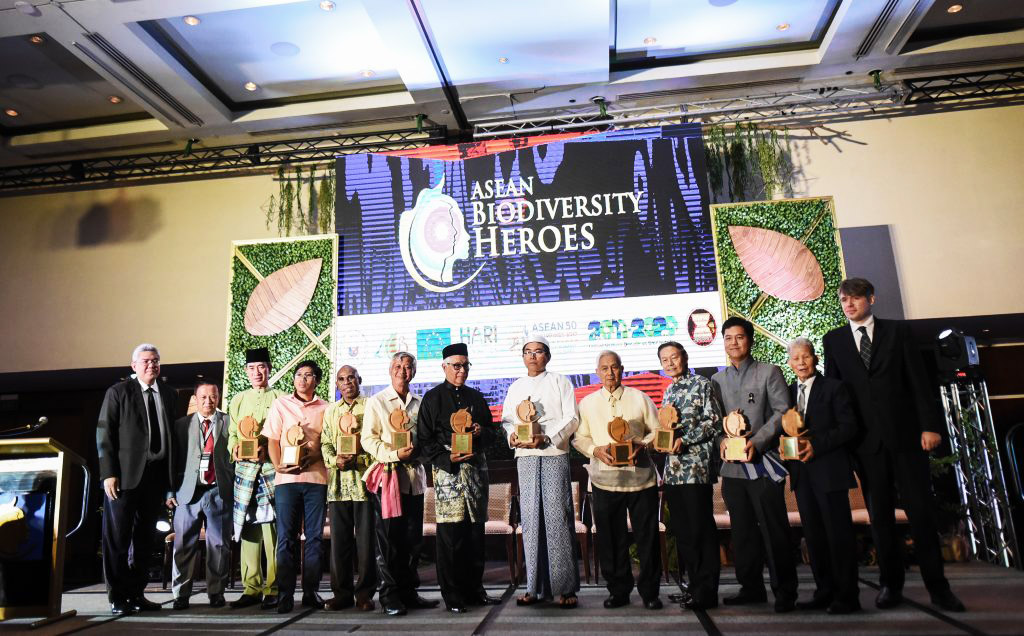 The ASEAN Biodiversity Heroes is a program designed to recognize outstanding individuals from the ASEAN region who have contributed significantly to biodiversity conservation and advocacy efforts in their respective countries.

From an indigenous community leader who is protecting Papua’s forest to a national scientist who is championing coastal resources management, the inaugural ASEAN Biodiversity Heroes honors inspirational and valiant individuals who have risen to the challenge of helping curb biodiversity loss. Each of the heroes, in their own different ways, have made significant impact on biodiversity conservation in their respective communities, countries, and the region.

The 2017 ASEAN Biodiversity Heroes are:

1. Mr. Eyad Samhan, Former Field Supervisor, Tasek Merimbun, Brunei Darussalam
For significant contributions to research on fauna and flora in Brunei and in the region

5. Prof. Zakri Abdul Hamid, Science Advisor to the Prime Minister of Malaysia, Malaysia
For making a lasting impact on analysis and assessment of global biodiversity and ecosystem services

“At the heart of the ASEAN Socio-Cultural Community (ASCC) Blueprint 2025 is the commitment to lift the quality of life of its peoples through cooperative activities that are people oriented, people-centered, environmentally friendly, and geared towards the promotion of sustainable development. Today is a celebration – where we rejoice the achievement and recognition of these ten remarkable individuals. It is also a celebration for the peoples of ASEAN. The Heroes will bring to the peoples of ASEAN a better understanding, awareness and appreciation of the diverse values of biodiversity and underpin the willingness of individuals to make real changes and actions that will bring about a more sustainable future for all of us,” said H.E. Vongthep Arthakaivalvatee, Deputy Secretary-General of ASEAN for ASEAN Socio-Cultural Community.

Representing Secretary Roy Cimatu of the Philippines’ Department of Environment and Natural Resources, Undersecretary Jonas Leones said the search for the ASEAN Biodiversity Heroes holds a special significance for the Philippines and the entire ASEAN region. “Without biodiversity, there will be no life, for biodiversity is life in itself. Without biodiversity in its myriad forms and inter-interdependence, we will not survive and prosper. Biodiversity feeds us, sustains healthy living, maintains a healthy and productive environment, helps nations develop and grow economically, promotes human development and well-being, and provides recreational facilities. In short, biodiversity is with us and around us, every moment, and in every breath we take,” he said.

The ASEAN Biodiversity Heroes is supported by the ASEAN Secretariat; the Philippines’ Department of Foreign Affairs; the European Union through the Biodiversity Conservation and Management of Protected Areas in ASEAN (BCAMP) project; and HARI Foundation, Inc. (HFI), the corporate social responsibility arm of Hyundai Asia Resources, Inc. (HARI).

Mr. Michael Bucki, EU Climate Change and Environment Counsellor to the ASEAN, expressed pride in supporting the ASEAN Biodiversity Heroes through the Biodiversity Conservation and Management of Protected Areas in ASEAN (BCAMP) project. “We need a global vision and a political will at the highest level to halt biodiversity loss and I have no doubt that the ASEAN – EU partnership can reinforce that vision towards a common objective and interest. We also need biodiversity champions who are making outstanding efforts, always acting beyond their personal interest and often taking personal risks. They make a significant difference in our day to day life and more importantly they lead by example in order that each and every one can contribute ‘to make the planet great again’.”

Each ASEAN Biodiversity Hero received a cash prize worth USD 5,000, a special Heroes medal and trophy.

Apart from receiving the ASEAN Biodiversity Heroes Award, the 10 heroes also received the Hyundai Icon for Biodiversity Award, a special prize from HARI Foundation, Inc. (HFI). “HFI opens a new leg in our journey of working and caring for Man and Planet as the Philippine automotive industry’s champion for biodiversity. We have covered substantial ground in our advocacy for education in environmental stewardship, but we know we can still do more to heed Mother Nature's desperate call for help. Partnering with the ASEAN Centre for Biodiversity is an important step towards expanding the scope and scale of our advocacy for social and environmental sustainability. I warmly congratulate this year’s ASEAN Biodiversity Heroes. With you in the spotlight as models for everyone to emulate, we can do more in broadening the awareness about biodiversity and in creating actionable measures toward its conservation,” Ms. Ma. Fe Perez-Agudo, president of HFI, said.

The ASEAN Biodiversity Heroes were selected by the ASEAN Member States. The nominating agencies considered the relevance of the nominees’ contributions to biodiversity conservation, the impact of these contributions to biodiversity conservation efforts in their respective countries and the region, the replicability of their actions, and the recognition they received in communities where they belong.

The heroes from the 10 ASEAN Member States will be known as the faces of biodiversity conservation in the ASEAN region. They will be invited to speak in forums, workshops, press conferences, and other relevant events to share their experiences in conserving biodiversity with the aim of inspiring others to do the same.